If you like to collect old phones, then this is a device that you might not have seen before. The Nokia 7700 was originally announced in 2004 but it was cancelled and never made it to production. It was going to be Nokia's first touchscreen phone, designed back in the days when phones were not as boring as today.

A handful of Nokia 7700s were produced as engineering prototypes and demonstration models. We have never been able to determine exactly how many, but there may be only a few dozen in existence.

It was something of a surprise therefore to see this auction pop up on eBay listing a "Rare NOKIA mobile phone unproduced model prototype F5 2005 M RAL-2" which is in fact a prototype version of the Nokia 7700. 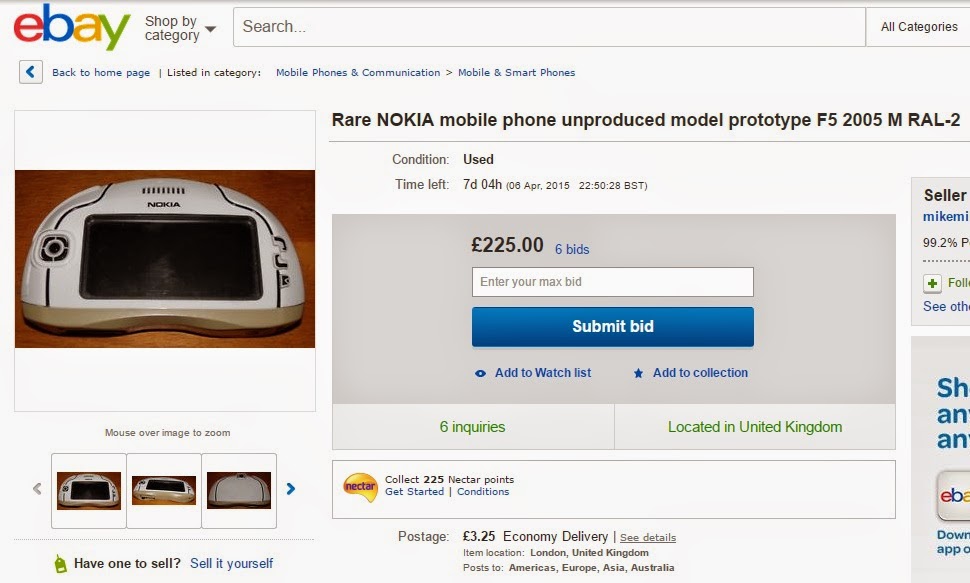 It is hard to put a value on how much a working Nokia 7700 is worth because they are so rarely available. I have only seen two devices ever on the market (and I bought one of those!) priced at around £500 on each occasion.

You couldn't use a phone like this as a daily mobile - the prototype software is rather buggy and it doesn't support modern features such as 3G, WiFi or GPS. But from our experience, it is a carefully designed and very interesting example of what smartphones could have been before they all ended up as black slabs.

UPDATE:
The auction finished and this (non-working!) handset raised an impressive £1020. So if you have one of these sitting about somewhere in a cupboard.. you know what to do!

UPDATE 2:
Another (working) version has appeared here with a starting price of £1700.