Research in Motion (RIM) are no more. To coincide with the launch of the new BlackBerry 10 operating system, the company will now be called just "BlackBerry" and carries the tagline "One brand. One promise."

The new BlackBerry 10 operating system is built on their own operating system, QNX. RIM bought QNX nearly three years ago, but although QNX has a reputation as a rock-solid operating system it didn't have a UI that could be used on handheld devices, so that (and many other components) had to be written from scratch. Even so, three years is a long time in the mobile phone industry and things have moved on substantially since then.

On the surface, BlackBerry 10 appears to be much more contemporary than Android or the iPhone out of the box, but it doesn't go as far as Windows Phone 8 which some people think goes *too* far from traditional designs. The interface makes use of various gestures to control applications, it is designed for easy multitasking (swiping the bottom of the screen bring up all running apps, for example). You can also peek from one application to another, for example to quickly check email while doing something else, and pulling down the screen reveals the calendar without closing the current application. The interface is designed to be use with a single hand.

BB10 aggregates information from various sources in one place, for example email, SMS, social networking and BBM messages appear in one screen. lightly creepily, BB10 will also pull together the personal details of contacts from places like LinkedIn and Facebook and builds up a dossier about them, including photographs and birthdays if they are available. BlackBerry say that one of the key markets are "hyper connected" customers who use social network a lot.

BlackBerry 10 is also designed to support both work and home profiles and move easily between them (called "BlackBerry Balance"), which is ideal if you want to bring your own device to work (known as BYOD). One part of the device can be fully managed by the company that the user works for, but the other part is logically separate and private.

BlackBerry Messenger (BBM) is a big issue for many users, and now it has been updated for video calling. You can also share the BlackBerry's screen across BBM, which is ideal for business collaboration. BBM is a key differentiator for BlackBerry and is just about one of the only things that BlackBerry remains relatively unchallenged.

BlackBerry Remember is a personal information management (PIM) tool that is a unified way of storing documents, web addresses, notes and media relating to certain tasks, also all in one place. Unlike more traditional PIMs, Remember looks like it might actually be useful for managing your personal information. 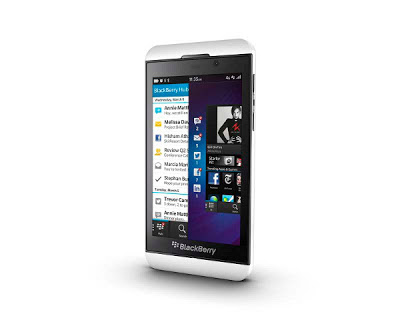 The camera has touch focus, and allows time shifting where effectively you can choose the best stills shot from a short video clip. Pictures can be edited on the device, which nicely sidesteps the need to use a service like Instagram if you want to retouch the photo before sharing. The "BlackBerry Story Maker" is another novel application, which allows film clips, pictures and audio to be combined together to make a short movie clip.

Several major movie and music labels have signed up to allow content to be bought through the BlackBerry World application store, which until now has been a collection of pretty uninspiring applications. When it comes to apps, BlackBerry have tried very hard to build up a decent collection before launch, with 70,000 applications available at launch with 1000 "top applications" available, but for all we know the other 69,000 could be fart apps. On the serious side, Skype, Amazon Kindle, Whatsapp, Foursquare and Angry Birds will all be available for the BlackBerry 10 platform.