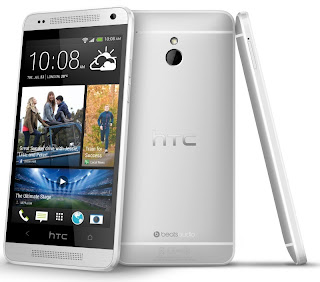 The HTC One is definitely one of the best smartphones currently on the market, but it is a little on the large side for some. So, following in the footsteps of the Samsung Galaxy S4 Mini, HTC have announced the HTC One mini.

The HTC One mini really does look like its bigger sibling and retains the One's distinctive good looks, unlike the rival GS4 Mini which just looks like any other Samsung phone.

Of course, the display is smaller being a 4.3" unit rather than a 4.7" one and unsurprisingly it has a lower resolution (but still manages to be 720p). But inside, the CPU is much slower and their is less RAM and onboard storage and there's no NFC support. However the ultrapixel camera is still on the back plus the One mini supports LTE.

Compared to the Galaxy S4 Mini, the HTC One mini is bulkier and less powerful inside. On the other hand, it has a much better display and camera and more onboard storage. Overall, we'd probably go for the HTC over the Samsung.

We'll have a closer look at the HTC One mini later. In the meantime, HTC say that it will start to be available from August with a global rollout planned for September. We don't know the price, but the rival Samsung retails for about €400 and we wouldn't expect the HTC to be much more than that.

Email ThisBlogThis!Share to TwitterShare to FacebookShare to Pinterest
Labels: HTC, HTC One