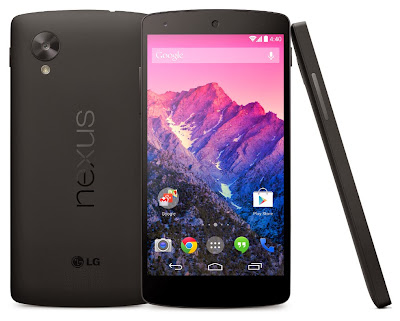 With a stunning 5-inch Full HD IPS display, Nexus 5 boasts an expansive screen for an unrivaled visual experience. The lightweight smartphone comes in both 16GB and 32GB versions and is the perfect combination of powerful performance, functionality and convenience thanks to LG’s proven hardware and best of Google software and services.

“LG is proud to partner with Google again to develop the fastest, most powerful Nexus phone ever,” said Dr. Jong-seok Park, president and CEO of LG Electronics Mobile Communications Company. “Nexus 5 offers the ultimate functionality in a modern design and is a testament to the level of innovation that can be generated when two great companies come together for a second act.”

“We’re excited to collaborate with LG on a new Nexus device,” said Sundar Pichai, senior vice president of Android, Chrome and Apps at Google. “Google Nexus 5 is the slimmest and fastest Nexus phone to date and puts the latest platform innovations of Android 4.4, KitKat, right in the hands of consumers.

Capturing the Moments that Matter
The camera in Nexus 5 features LG Innotek’s acclaimed optical image stabilizer technology which was first introduced in the LG G2. Mated to an 8MP camera with longer exposures, less blur and less noise, Nexus 5 is unmatched in dim light performance. Nexus 5 also includes Photo Sphere making it easy to capture a series of photos and turn them into a seamless 360-degree experience. And Google can create Auto Awesome photos and movies from the content in your library to share with friends and family. Moreover, the improved HDR+ mode in Nexus 5 instantaneously captures a burst of shots and applies computational photography to intelligently fuse these images together into one perfect photo with a greater range of shadows and light culled from the multiple exposure and color data.

Packed with Power & Speed
Nexus 5 is the world’s first phone running Android 4.4, KitKat, offering the power of Google in a thin and lightweight device that still manages to feel solid and reassuring. With a blazing fast SnapdragonTM 800 processor and 4G/LTE, Nexus 5 also boasts a 445 ppi Full HD IPS display with advanced in-cell touch technology that enables faster touch recognition, better outdoor visibility and crisper images. This set of features is packaged in a sleek, modern design that leaves no doubt that this is Google’s premium smartphone.

Best of Google
Android 4.4 is fast and powerful yet simple to use. The new dialer automatically suggests people the most likely call while Caller ID by Google matches an incoming phone number to a business even if that number isn’t stored in the contact list. Users can send and receive text messages directly from Hangouts, and Hangouts for Android now supports location sharing.

With Gmail, Chrome, Calendar, Maps, Drive and Hangouts, Nexus 5 helps users manage their day-to-day lives with familiar, easy-to-use applications. With Google Now, initiating a voice search is as simple as saying “Ok, Google,” and with more than one million apps and games plus movies, books and music on Google Play, it’s easier than ever to find what you’re looking for.

Nexus 5 will be available for purchase in either black or white, no contract required, on Google Play™ starting today in the United States, Canada, France, Germany, Italy, Spain, U.K., Australia, Korea and Japan. Offline availability in Europe, Central/South Americas, Asia, CIS and the Middle East will begin in mid-November.