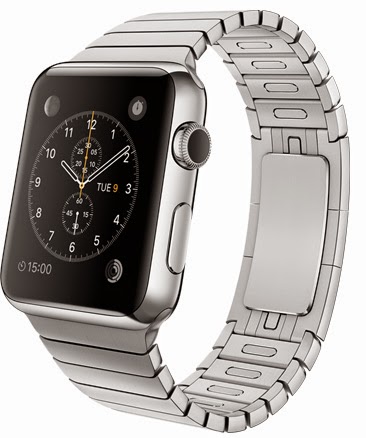 Apple's new smartwatch has been awaited for a long time, and finally Apple have made it official with the launch of the Apple Watch. No, not iWatch.. just Watch. In fact, there are several different versions in different sizes and materials, which is a bit confusing at first.

As with the iPhone, Apple have entered the market some time after the competition, but they are hoping that the unique features of the Watch will win customers over. One key difference is that a lot of the control of the Apple Watch is done through the "digital crown" on the side, a sort of high-tech clickwheel. Of course, it's a touchscreen as well, but using both control devices might well make it easier than just a touchscreen alone.

As you might expect, this is not a standalone device and it needs to integrate with a compatible iPhone (5 onwards). Of course, Android users have more choice of devices, but until now Apple users had none at all.

With a built-in heart-rate monitor, gyroscope and a pedometer, combined with integration into iOS 8's Health app and a whole load of built-in applications, then it seems that the Watch is designed to be a fitness companion along with all the other features. Some other features including Emoji-type messaging and a maps application with something called "tactic feedback" which helps you know which way to turn.

The Apple Watch has its own wireless charging system that clamps onto the back magnetically. There are a choice of six straps, including leather ones and sports ones with either traditional or magnetic clasps. Large and small versions are available, plus a "sport" version with a tougher casing and of course there's a gold one too.

Some novel features with the Watch include an application to find where you parked your BMW, an electronic key system for Starwood Hotels (presumably using NFC), and you can use it as a ticket for American Airlines as well.

You'll have a bit of a wait for the Apple Watch, Apple say that it should be available from early next year with prices starting at $349.